So just WHO is RAY GLASSER??

I am a crazed/compulsive videophile who has been involved in home video since 1976, when I purchased my first Betamax in June of that year. (I actually saw the first Betamax, the LV1901 console, in late 1975, but couldn't afford that $2495 price tag!!  So, in early 1976 after I saw the first stand-alone deck, the SL-7200 [which was a more reasonable $1260], I took a second job to save for my first piece of video gear.)   I remember bringing home the 7200 on Monday, June 14th, 1976 -- the department store even gave me their floor model since they were out of stock!  I lugged the thing home in the Cleveland summer heat, with five K-60 [1-hour] tapes (at $16.95 a pop), and began the most obsessive and expensive hobby of my life!!

Later that year I discovered a home-grown publication called THE VIDEOPHILE'S NEWSLETTER, published by
Mr. James R. Lowe, an attorney from Tallahassee, Florida.  He talked about the new, growing hobby, the availability of Betamax machines and tapes, starting a library, etc., and invited readers to send in their questions, ideas, Want Lists and Have Lists.  He also suggested swapping recorded tapes by mail -- a novel idea at the time!  By the time THE VIDEOPHILE folded in 1981, Jim had gained thousands of subscribers and followers.   Remember, video stores weren't around yet, so most of the early viewing fare was simply old TV reruns that people enjoyed by swapping tapes, with other readers, of the shows they couldn't get in their area.  (And a cardinal rule back then was to ALWAYS cut out the commercials -- something that's fallen by the wayside over the years, unfortunately!!)  Uncut movies, such as those shown by HBO and Showtime, were hungered for in a big way back then, since very few people had cable TV (not to mention satellite dishes!).   Ah, those early days of video...they were so much fun!!

Since those early days I have collected over 2500 videotapes, have bought, sold, and owned over forty VCRs (mostly Betamaxes), and have made countless friendships.  After all these years, I have basically STOPPED recording TV shows (I have just lost interest in current TV), and collect movies on DVD.   To say that home video has changed my life would be a huge understatement!!  I have taken trips to meet fellow videophiles across the country, spent tons of money keeping the machines going over the years, have written for video magazines, and have numerous claims to fame: I was featured (with full color picture) in the USA TODAY WEEKEND Sunday Magazine, where they featured me as a video collector for a new page dealing with home video, back in 1986. (See the article and picture below.)   In 1997 the New York Times ran an article on "obsolete video formats" and this website was mentioned.  In November 2000 US NEWS & WORLD REPORT interviewed me and ran my name in an article on old video formats.  (See links to both of these below.)   I have been in touch with -- and written for -- numerous Betamax groups who continue to keep interest and information alive in the format.  It's amazing how these groups have moved right along with the times...first as published newsletters and fanzines, and now on the Internet and the www.  And over the past few years, the popularity of the eBay auction site has enabled many people to buy used Beta machines and enjoy this superior format!!

As the years rolled on, I have learned some new skills, such as video production (especially taping and editing weddings); have gone from a rooftop TV antenna, through cable TV, and at one time owned a DSS; and have progressed in quality from the first "X-1" monaural Betamax through SuperBeta, Beta Hi-Fi, up to ED-Beta, mini-DV tapes, and now work with SD cards!   The amount of money I have spent in this hobby is staggering...between purchasing VCRs, repairing and maintaining them, buying blank tapes, paying long-distance phone bills, postage, etc.  Just for the record, my VCR line-up (as of July, 2014) includes: my original  SL-7200 (non-working);  a Sony  SL-HF750 Superbeta Hi-Fi deck; the original LV1901 console (both the TV and the Betamax are broken); an industrial SLO-383 X-1 editor,  a Marantz VR-200 from 1982 (currently broken); and my FOUR Japanese Betamaxes: my precious SL-J7 (which was a wedding gift from my wife in 1980, and still works!); an SL-J9 (non-working), an oddball called the SL-HF1000D from 1989, which has the linear-skate loading mechanism of our SL-HF750 PLUS the B-ISHB recording capability of the SL-HF1000, and my most recent gem, an SL-HF3000 with optional wooden sides (the Japanese equivalent of our high-end SL-HF1000 SuperBeta editor [see my unboxing video of this unit below].   And yes, I even have a "token" Super VHS machine, an industrial Sony SVO-2000.  In 2007 I bought my first NON-Sony TV since 1978, a 40" Samsung HD LCD set, which is truly amazing and continues to serve me well.

Over the years my video activities and interests have expanded.  I started going to video-oriented trade shows beginning in 1981, such as the Consumer Electronics Show, the VSDA (the Video Software Dealers Association show, which is now defunct), the NAB, and even went to a few COMDEX shows as my interest in computers grew.  In the mid 1980's I also helped a friend in Florida produce a home-grown cable TV show by sending in contributions about home video on Beta video cassettes!  Throughout the years I have written for major video magazines as well as fan-based "fanzines," and have even put together "video conventions", where as many as 60 videophiles got together with their machines and newest movies and traded tapes!  I have also been mentioned in a few books, notably "From Betamax to Blockbuster" (MIT Press, 2008), and "The Erotic Engine" (Doubleday Canada, 2010).

Now it's well into the new millennium, and home video in general has changed drastically since the 70s.  You can hardly find a VHS machine anywhere, as tape is becoming more and more passé as every year passes.  Even the new digital camcorders don't use tape anymore, it's removable chips and portable hard drives!  In early 2007 I discovered YouTube, and have uploaded thousands of videos there, showing my Beta machines, tapes, and have transferred tons of clips of old TV shows from my Betamax library.  People love it!! I am known as "videoholic" on YouTube, and I have over 2500 videos on my "videoholicULTIMATE" channel.  I also have a lot of videos on DailyMotion.com; my two accounts there are "tvnut" and "videohollic."

As a sign of the times, my poor Beta format has dwindled to almost a cult status, with a small core of die-hards that keep their machines alive and their collections growing, and communicate with each other thru the Internet, which has become the meeting place for most of us, especially through websites like this one.  Plus we have the Chat Groups, and the newsgroups and on-line newsletters and classifieds that let us find some used machines and tapes once in awhile!  Even eBay has become a Godsend, what with all the Beta machines, tapes, etc., that are always available on auction.  And now that the Digital Age is finally here, with digital tape, recordable DVDs that are finally priced for the masses, and the ability to transfer tapes to computers and hard drives and other digital media, we can preserve our precious Beta collections and breathe a sigh of relief.... 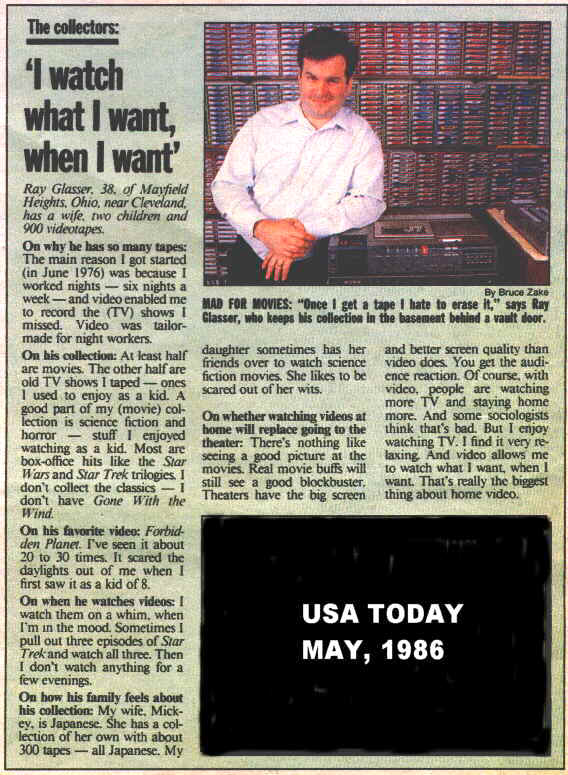